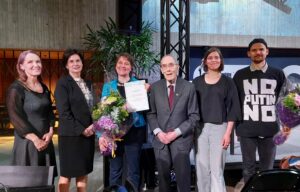 The awardee of the Finnish Science Academies’ Risto Pelkonen Human Rights Award was published on World Press Freedom Day, 3 May, in Think Corner, Helsinki. The recipient is Scholars at Risk Finland (SARF), which is a national section of the international Scholars at Risk (SAR). Its mission is to protect scholars and promote academic freedom. The chair of SARF, professor Elina Vuola, University of Helsinki, received the award.

The Award is granted for active efforts in promoting human rights in academic communities. “By taking part in SAR network and providing for scholars at risk, universities show that they take responsibility for human rights on a global level. This is a necessity for the recur of science”, the Chair of the Award Committee, professor Liisa Laakso explained.

The award consisted of a video installation Climbing a memory by Pavel Rotts, Academy of Fine Arts of Uniarts Helsinki. In his work, Rotts explored collective and personal memories, historical trauma and the legacy of the Soviet system in contemporary culture.

Professor, archiatre Risto Pelkonen expressed happiness for the awardee, but also “confusion and sorrow in the face of current tragic world events.” Pelkonen is one of the founding members of Human Rights Committee of the Council of Finnish Academies.

The panel discussion, moderated by Emilia Palonen (University of Helsinki), related to the current political and humanitarian crisis in Europe and its effects to the global science community. Despite of the gravity of the topic, panelists – Kalle Korhonen (Kone Foundation), Siarhei Liubimau (European Humanities University), Olena Maslyukivska (University of Vaasa) and Margarita Zavadskaja (Aleksanteri Institute) – found some hope in having the possibility to sit in the same room and discussing about it.

“Scientific and artistic processes require courage, and courage we must be able to protect”, crystallized Permanent Secretary Anita Lehikoinen, Ministry of Culture and Education, in her speech.

The programme of the event: programme